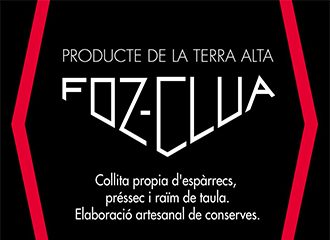 Foz-Clua Asparagus is a small family business now run by Rubén Foz from a modest farm of asparagus, table grapes and peaches. Foz-Clua Asparagus represents the flavors of Gandesa in the region of Terra Alta, in the province of Tarragona.

Although the company Foz-Clua Asparagus was founded in the 90s, the truth is that the Foz family has been a pioneer in the cultivation of white asparagus in the province of Tarragona for more than 50 years. Some time ago their production was sold to a cannery in Navarra until the appearance of asparagus from other countries caused prices to drop and that was when the Foz-Clua Asparagus brand was created.

Regarding the production of canned food, they began producing them in 2015 and they do it in a completely artisan way. Completely manually, they peel the asparagus and put them in glass jars with the corresponding volume of bottled water, salt and vinegar.

“At Foz-Clua Asparagus we are very happy, both with the autoclave and with the technical consultancy service. We would recommend it a thousand times.”

Problem: getting the most out of your asparagus

Foz-Clua Asparagus has never doubted the quality of its product. However, they were aware that this was not enough to take advantage of their effort and dedication on the field.

They needed to expand their product offering and professionalize themselves, at least in some of the steps of the process. However they were not willing to do that without their craftsmanship or manual labor. They knew very well that, together with the excellence of their asparagus, those are indispensable properties that give added value to their brand and their product.

Foz-Clua Asparagus began its activity preparing its preserves in a homemade way, leaving the asparagus boiling for 3 hours in a water bath. They decided to reduce the cooking and sterilization time of their preserves and, at the same time, look for a method that would guarantee meeting all the applicable food safety regulations. They couldn’t afford to waste their time in the middle of the campaign. It was not feasible, since they also had to carry out many other tasks such as harvesting in the plantation.

They were therefore looking for a small sized autoclave that would suit their preferences and the production needs of their modest farm, and that, at all times, would save them time and ensure a perfect sterilization.

“Using an autoclave guarantees a perfect sterilization that with the previous way of preserving that we used you could not be 100% sure.”

“It was quite difficult for us to find a manufacturer of autoclaves with these characteristics, since what is most on the market are huge industrial autoclaves or laboratory autoclaves.”

They found the answer to their demands by chance and thanks to YouTube, there they found a video of TERRA Food-Tech® autoclaves and when they had the opportunity, they approached their offices in Barcelona.

Once the autoclave was acquired, they faced a double challenge, which consisted in finding the optimum cooking point and doing it at the beginning of the season. They achieved their purpose, not without certain difficulties, since as they were in the middle of the recollection campaign they could not do a real test with the technician. Anyway, they were able to consult all their doubts by telephone.

“The technician explains it to you wonderfully and then, if you have questions, he is always available by phone.”

In addition, the COVID-19 pandemic became another problem, which caused that the laboratory with which they test production samples was closed and they could not do the assessment by sending samples. Finally, they were able to figure it out thanks to email and the technical service provided by TERRA Food-Tech®.

Fortunately, they discovered that, although at first the handling of the autoclave seemed extremely complicated, in reality it was not so complicated and that it only required intuition.

“Since we own the autoclave we have had more time to do tests and we feel much more confident with the sterilization process. We managed to double our canning production”.

This is the advanced configurator for own and third party cookies. Here you can modify the parameters that will directly affect your browsing experience on this website
Technical Cookies (Necessary) Always Enabled
These cookies are important to give you secure access to areas with personal information or to recognise you when you log on.
Non necessary
Any cookies that may not be particularly necessary for the website to function and is used specifically to collect user personal data via embedded contents are termed as non-necessary cookies. It is mandatory to procure user consent prior to running these cookies on your website.
Analytical cookies
They allow anonymous measurement of the number of visits or the activity. They enable us to improve constantly your browsing experience. They will allow you to enjoy continuous improvement in your browsing experience.
Personalization cookies
These cookies are related to general characteristics such as, for example, the browser you use, and provide you with a personalised experience and content.
Save & Accept