Mixblik is a foundation dedicated to the production of artisanal preserves with the aim of offering a new opportunity to as many women as possible.
Home
Success stories
Mixblik 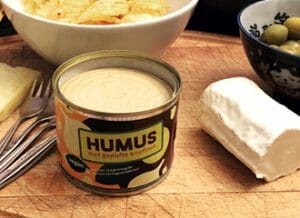 Mixblik was created in 2020 by the Dutch Iris van Beers and Esther van der Hoeven, to offer new opportunity to as many women as possible. And, for this, it is dedicated to the preparation and sale of packaged, sustainable and locally produced food.

Mixblik is therefore both a foundation and a company, a canning initiative with lots of social value. It all started with the ‘Blikvanger’ project, a social and creative workshop for vulnerable women. From this initiative, several of the participating women decided to embark on the Mixblik adventure.

At Mixblik they make different types of food in two different sizes: lentil stew, Eritrean Silsia, humus and there are many more in the works. The first two are offered in large and small cans and the humus only in the small containers. In addition, they also make their own Sambusa, which are a kind of fried or baked dumplings, with two types of filling: potato and carrot and parsley with feta.

Problem: how to get self-financing with canned stews

The biggest problem for this Dutch entity was combining its social value as a Foundation and becoming a viable business, fully financially sustainable. Giving an opportunity to women, often illiterate, helping them through the elaboration of canned stews to develop skills, such as administration, sales, networking and product development. And, at the same time, being a totally independent business foundation from a financial point of view has been very complex for Mixblik.

Another obstacle they encountered when starting their business was changing certain trends. Citizens of Holland are very little accustomed to buying canned food. According to a social study carried out by an independent entity at the request of Mixblik, Dutch society thinks that canned food is not tasty, healthy or fresh. This research also explains that the people questioned want to eat healthy and tasty meals, but do not have time to spend hours in the kitchen. Hence, the mission of the foundation was focused on convincing them that with their packaged stews not only they obtain a quick meal, but also a healthy and tasty snack.

Another topic that the study indicated is that only one in three consumers think that canned food is environmentally sustainable. This is not the case with Mixblik, they chose cans as their container for its stews because they can always be recycled. They do not require extra packaging, they are light, and they can keep food well out of the refrigerator. Therefore, there is low energy wastage in subsequent transport and storage.

The challenges arose because they pursued the following objectives:

Getting its lentil stews, Eritrean Silsias, and humus to be tasty enough once preserved, was a puzzle for this entity. They had to play with the ingredients of their recipes without losing their traditional taste. The difficulty laid in the vegetables used and in their combination, which are many.

After investigating, Mixblik opted for sterilization as the ideal method for the conservation of its elaborations. After studying different options, they opted for a TERRA Food-Tech® autoclave. Achieving sterilization solved the issue of cold.

“Mixblik’s experience with TERRA Food-Tech® has been very pleasant, they have helped us a lot both with the autoclave setup and with the first steps of canning.”

The appearance of corrosion in the cans was a problem because with the water and high temperatures they tended to oxidize, giving a horrible taste to the food and making the labels not stick. In the end, with the technical help of TERRA Food-Tech®, they managed to find the exact processing time so that the metal containers did not spoil at all.

“Cans are not as easy as glass jars. The quality of the water must be carefully controlled to avoid corrosion and closure. It is a very detailed job.”

Controlling the taste of their dishes was another challenging issue because, as we have already mentioned before, this varies with each type of vegetable used, especially when sterilizing them. They did many tests combining various vegetables, herbs, and cooking times. Ultimately, they found the most suitable processing parameters and recipes for most of their products. Although, they are still studying how to make the aubergine stay tasty after processing.

“The TERRA Food-Tech® autoclave has been very important for our business, as without it we would not have been able to sell any of our products in the long term. We are very happy with our autoclave and the services offered by TERRA Food-Tech®.”

Now, once they have achieved almost all of their goals, Mixblik explains to us that they have a well-established action protocol. Each of their preparations started from scratch. In addition, they take advantage of the heat generated while processing their products, and thus they do not fully cook their stews, and they are finished inside the autoclave. They fill and weigh the cans, making sure that the weight of each one is correct. They close the container with a specific machine for it. They put the batch in the autoclave, choose a test can, drill it and place it in the middle of the rest of the cans while inserting the heart temperature probe to know when the sterilization is ready. The specific program is selected, and then they let the machine do its magic. When the process is over, the cans are stored until it’s time to put them up for sale.

“We would definitely do it again. With the insights we’ve gathered and having cleared all the obstacles we’ve encountered, we have gained lots of confidence in the future of our canning business. And the truth is that the TERRA Food-Tech® autoclave makes everything much easier for you.”

Quattro Stagioni is the first preserved food artisan in the Republic of San Marino, to promote the territory and quality food.

Antoni Izquierdo Gourmet is a new project of the Mas dels Arcs restaurant specialized in sauces, stir-fries and preserves from the Costa Brava.

Manage Cookies
Cookies are important for you, they influence on your browsing experience, they help us to protect your privacy and allow us to proceed with your requests that you demand through the website. We use our own and third-party cookies to analyze our services and provide you with advertising related to your preferences on the basis of a profile made with your browsing habits (for example, visited pages). If you consent to its installation, click on "Accept Cookies", or you can also set your preferences by pressing "Cookie settings".
Manage options Manage services Manage vendors Read more about these purposes
Cookie settings
{title} {title} {title}