Quattro Stagioni is the first preserved food artisan in the Republic of San Marino, to promote the territory and quality food.
Home
Success stories
Quattro Stagioni 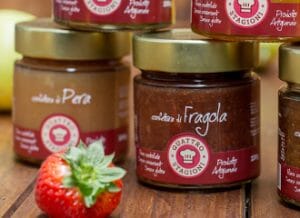 Quattro Stagioni was founded by Stefano Rondelli in 2014 with the aim of promoting the territory, traditions and the production of quality food. It later became the first preserves artisan in the Republic of San Marino, a country located in Southern Europe within Italy.

The idea and the value of the project earned them a special mention in the Nuove Idee Nuove Imprese competition, a competition for companies that contribute to the innovation of the economic and industrial system of Rimini, Forlì-Cesena, Ravenna and the Republic of San Marino.

In the Quattro Stagioni workshop, apricot, pear, peach, peach, strawberry, dried fig and strudel jams and marmalades are made. And also creams, sauces and savory dressings; in oil; and also a planter for every season of the year.
Its preserves are characterized by the quality of their ingredients and the research of new recipes following the traditions and also reaching the most modern and appetizing preparations for their characteristic flavor, as each recipe preserves the unmistakable flavor and aroma of Quattro Stagioni.

Quattro Stagioni also offers its services and facilities to third parties, in particular to producers, restaurateurs, traders and private individuals who wish to create their own line of preserves.

Problem: Offering a service that did not exist up until now

The greatest difficulty Stefano Rondelli encountered was precisely the novelty of his proposal. Even though he knew it was the first time such a thing had been done in his country, the Republic of San Marino, the smallest and oldest republic in Europe and one of the smallest states in the world. Stefano took his passion for local cuisine and tradition and created the artisan workshop Quattro Stagioni.

He knew that to make the space profitable and carry out his preserves business and market them, he had to consider something different. He also wanted to make most out of the knowledge gained, and the time spent on bureaucratic and legal matters to comply with italian food safety regulations. For this reason, in addition to making its own preserves, it also produces preserves for third parties on demand and offers them help to boost their business.

The complexity of their initiative lay precisely in its virtue, as they were the first to create their own artisan bakery with production for third parties, which generated many new demands and also marked a new path in this field.

Challenge: starting from scratch in the world of preserves

Starting Quattro Stagioni also required entering a world hitherto unknown to Stefano Rondelli. He had to know the artisanal production and the machinery techniques to be used, learn how to market the product and the service on behalf of third parties.

Choosing which machines to work with was a complicated and essential decision, and even more so considering that it offered its services to third parties. Any company must guarantee the performance of its tools, especially when they represent a significant investment.

For some years, this young Italian entrepreneur had been looking for a suitable autoclave for a small company like Quattro Stagioni and for his processing plant, but he could not find anything that suited his needs.

Moreover, its activity was initially limited to the pasteurization of its preserves, so that the variety of products offered was based solely on the possible applications of this heat treatment. Until he came across the company Astori Tecnica, exclusive distributor of TERRA Food-Tech® autoclaves in Italy.

Stefano confesses that the experience was very positive because they helped him a lot in the initial testing phase and with the configuration of the machine. In doing so, he managed to sterilize his preserves.

Likewise, having worked with them for some time, he confirms the great availability and competence of Astori Tecnica and, above all, of Fabio Marchi, because they have been able to clear all his doubts.

Regarding the autoclave, according to the founder of Quattro Stagioni, the change was very significant and could be seen both in the increase in production and in the expansion of the range of its products. All these improvements have been possible thanks to sterilization and will undoubtedly allow your business to reach more people with a greater variety of preserves, as well as helping to improve the productivity of all the customers who rely on your artisan workshop.

“When we saw the TERRA Food-Tech® autoclave, we understood that this machine was the ideal solution for our reality. Now, once it has been installed and the new recipes have been studied, everything is much simpler”.

Stefano is also passionate about preserves and on the Quattro Stagioni Facebook page, he offers videos with tips on how to make preserves at home.

“I would definitely recommend the TERRA Food-Tech® autoclave for its price-quality ratio. Having everything ready with one piece of equipment without the need for additional steam systems or external air compressors is very convenient.”

Mixblik is a foundation dedicated to the production of artisanal preserves with the aim of offering a new opportunity to as many women as possible.

Antoni Izquierdo Gourmet is a new project of the Mas dels Arcs restaurant specialized in sauces, stir-fries and preserves from the Costa Brava.

Manage Cookies
Cookies are important for you, they influence on your browsing experience, they help us to protect your privacy and allow us to proceed with your requests that you demand through the website. We use our own and third-party cookies to analyze our services and provide you with advertising related to your preferences on the basis of a profile made with your browsing habits (for example, visited pages). If you consent to its installation, click on "Accept Cookies", or you can also set your preferences by pressing "Cookie settings".
Manage options Manage services Manage vendors Read more about these purposes
Cookie settings
{title} {title} {title}